Ian Dury, of Blockheads fame, was a Unicef UK Ambassador when I started as Executive Director in 1999.  Unfortunately, I never had the opportunity to get to know him as he died in early 2000, later to be succeeded by Robbie Williams (the instigator of the wonderful Soccer Aid event which happens again at Old Trafford on Sunday 5th June 2016).

Ian had polio as a child and campaigned for many years to bring the paralysing disease to an end.  In his famous song, “Reasons to be Cheerful” he demonstrates the positive and resilient spirit that motivated his work and his life.  He found many reasons to look on the bright side, including memorably the verse:

“Elvis and Scotty, the days when I ain’t spotty
Sitting on a potty, curing smallpox
Reasons to be cheerful, part 3”

Smallpox was declared eradicated in 1980.  Ian Dury would be cheered to know that the last case of polio is now in sight – it could happen this year or next. Only Pakistan and Afghanistan remain as endemic countries, following the removal from the list of India (in 2012) and Nigeria (in September 2015). When I was growing up in the UK in the 1950s, it was not at all unusual to see affected children here in the UK.  This year (2016) there have been just 16 wild poliovirus cases worldwide up to 25th May.

As I finish my last week in the job I started in 1999 it has sparked a great deal of reflection.  I’ve spent my life campaigning for a better world and will continue to do so into my retirement (though I hope at a slightly less frenetic pace!) Charities I fear may sometimes, and very understandably, emphasise the need they are seeking to meet and not focus enough on just how much thepublic’s generous donations and letter-writing campaigns are actually making a difference. They are. I know.  I have seen the benefits of UNICEF’s work, and that of our many partners, in 35 visits to programme work over the last 17 years.  One of the most moving experiences is to meet children and young people whose courage, determination and resilience in the face of even the gravest suffering and adversity is a lesson to us all. Even they find reasons to be cheerful – and if the reasons are not there, they act to create them! 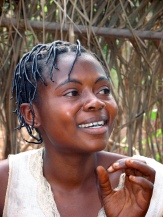 I met Ngozi in Nigeria.  Having lost her parents to HIV/AIDS, she and her brothers were trafficked into exploitative domestic service. But Ngozi escaped, found her way home and set about finding her brothers. Unicef was able to help her to learn the skills she needed to find a livelihood and keep her brothers in school. I met Peter in Northern Kenya where drought had killed the family’s livestock. Peter saw an opportunity – with no cattle and goats to care for he was free to pursue his dream of education and walked across the desert for three days to get to a school. Bithi, from Bangladesh, had experienced a life of exploitation and abuse for the whole of her 14 years, never feeling safe and cared for.  But when I met her in a shelter for girls in Dhaka, safe for the first time, she was looking forward to a brighter future.

It has been my enormous privilege to be able to support such amazing young people during my career – with the help of Unicef UK’s incredible supporters.  We have done well together and made a difference for millions of children.  Though I know that what we achieve can never be enough as long as even one child continues to suffer, to be alone, excluded, discriminated against or unable to fulfil their potential, I always try to be positive and find my own reasons to be cheerful. When seeing how much they often endure, the privilege of being able to make a difference is without doubt a great reason to be cheerful.

The world is changing for the better, despite the very serious setbacks that always happen along the way.  When I look back over my lifetime, I remember the campaigns I have been a part of – against the horrors of the war in Vietnam and its aftermath in Cambodia, against the scourge of apartheid in Southern Africa, for an end to the nuclear threat and global conflicts arising from the Cold War, and for human and children’s rights wherever they have been ignored or abused.

When I started my career, Latin America was dominated by brutal military dictatorships.  Today, these dictatorships are gone.  Apartheid is gone.  The Cold War is over, the Berlin Wall has fallen, deaths of children under 5 have more than halved, The UN Convention on the Rights of the Child, adopted in 1989, has become the world’s most ratified human rights convention. Smallpox is no more, and polio will soon be consigned to history.  All of these are reasons to be cheerful – or at least to be hopeful and optimistic that even the most apparently intransigent global problems can be solved through the action and determination and support and solidarity of people of goodwill. People who care can and do make a difference!

Of course, today we still face many challenges. Despite the agreement in Paris last year, we still have a lot more work to do to ensure the world is secure against the effects of climate change.  The conflict in Syria must, and will, come to an end. We need to do more to ensure that young people can find employment and livelihoods in the midst of austerity, global economic slowdown and the deep inequality that divides and excludes.  We need to exercise our humanity, and put aside our fear, when addressing the movement of refugees across the world. We need to ensure that everyone feels included, has a stake in a better world, and does not become vulnerable to the attractions of violence and fundamentalism and hatred.  We need to build systems of education that focus on values, building tolerance, respect for the environment and a sense of solidarity. These principles are spelled out powerfully in Article 29 of the Convention on the Rights of the Child – it is genuinely worth a read.

These challenges are addressed in the Sustainable Development Goals, through which the world has dedicated itself to change by 2030.  These ambitious goals can be achieved – but only if we apply the same determination and belief as we did in the struggles of the past.  With courage, innovation, bold leadership, strong principles and co-operation across the world, these challenges can also be met.  I am looking forward to celebrating their achievement in 2030 – I will be 79 and, I hope, up for the party!

Now that would be a reason to be cheerful!

3 thoughts on “Reasons to be cheerful”