Having spent a long and fulfilling career in charitable organisations, it won’t be a surprise to anyone that I believe in the fundamentally vital role that voluntary organisations (the so-called “Third Sector”) play in our national (and international) life. Charities will be needed now more than ever, as the UK faces Brexit-related uncertainty, upheaval, division and potential economic hardship. Yet, it seems to me, that they don’t always receive the recognition, respect, and public, media and political support, that they need and deserve. It’s time that changed!

It is of course hard to generalise about a sector that includes up to 400,000 organisations (165,000 are registered by the Charity Commission in England and Wales but there are many more (see http://bit.ly/1j5VoGz)). These range from the local village hall to Cancer Research UK. NCVO calculated that there is a voluntary organisation for every 380 people in the UK – in fact, that figure could be as low as every 160 people.  We are all involved in our Third Sector. It is fundamental to our communities and to our national life.  Charities and voluntary organisations save lives, stand by people in difficulty, give a voice to those who are otherwise unheard, protect our environment and speak up for the disadvantaged, disempowered and invisible in our society and in the wider world.  They uphold universal values, and bring ethical and caring perspectives into national debate. There is nowhere in the world where charities are a more valued and fundamental part of our lives than the UK.  It is something we can and should feel very proud of.

The total income of the UK’s Third Sector has been estimated at £71.7billion (http://bit.ly/29nnmcu) It contributes more to national income than agriculture and employs one in every 37 people in the workforce (http://bit.ly/29vxlhE).

Despite a considerable amount of recent adverse media attention charities remain among the most trusted institutions (http://bit.ly/29oRZDI), level with the Royal Family, ahead of the BBC – and way ahead of the Church: 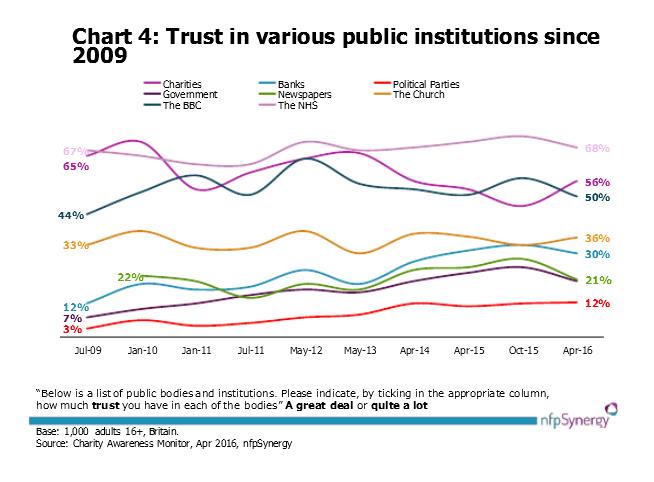 There has been a lot of soul-searching and internal debate in the sector since the media started to give regular headlines to poor fundraising practices over the last year or more. Many felt, with some justification, that they were being unfairly targeted, yet the predominant conclusion was that charities need to work even harder to sustain public support and to ensure that they uphold the highest possible ethical standards in all that they do.  The sector has largely responded to the upsetting and negative attention in a positive and determined spirit.  A new system of self-regulation is now in place and most charities have taken the chance to review and strengthen their governance and their systems and procedures. Charity leaders know that they can carry out their valuable work only with the fullest and most engaged participation and support of the public.

I do have to say, though, before looking to the future, that the broad impression members of the public would have received from last year’s media and political onslaught is that UK charity people are unprofessional, poorly governed, overpaid and out for themselves.  Without detracting from the legitimacy of some of the criticism, I am concerned that this overall impression is totally misleading. While there are some in every sector that lack principles and capability, in my experience the people who work for our charities are the best.  They are dedicated, hard-working professionals who are paid less than their skills would command in other sectors. Why do we criticise the pay of charity executives who bring great expertise and dedication to the task of social benefit, when we seem not to flinch from the far higher pay of media and sports stars and business leaders? And while the Board members of companies and even public sector institutions are well paid, charity trustees almost always work for nothing, taking on huge responsibilities and giving up massive amounts of their valuable time, just for the benefit of helping their cause. Those trustees and executives will be the first to say that they should be held to account – and they are! They are regulated by the Charity Commission, they are financially accountable to common recognised high standards, and they are also subject (as companies) to all the same regulatory requirements as any business. So it is time also to give them the support and recognition they thoroughly deserve.

So where do we go from here? Charities themselves are working hard to tell their great story more effectively.  That means telling the compelling stories of their millions of beneficiaries. It also means explaining more clearly how modern charities operate. That is needed because there is a mismatch between the reality and the public perception of charities and their work. While the majority of the UK’s charities are small and remain largely volunteer-led, many, including the biggest household names, are well-organised, complex and highly professional organisations taking daily responsibility for critical and sensitive areas of people’s lives.  We need them to be professional, not amateur. Running such organisations well costs money and it would be an unacceptable risk to try to do it on a shoestring or to cut corners or to depend entirely on volunteers or people who can afford to work for very little. Our charities employ some of our best and brightest people and they should and do pay fairly (though never excessively) for that talent.

In my view, having worked closely with many of the UK’s leading businesses as well as with many charities, the third sector is at the forefront of business and leadership practice. Other sectors could benefit by taking on board some of the principles and culture of the best charitable organisations.

So, what’s next in the debate about the future of our charities should be an end to the calls for ever more regulatory burden, improvements in Government support, including perhaps the long-sought exemption from VAT, a new focus on the carrot rather than the stick. The media and the politicians have had their say and it has made a positive difference; now charities need encouragement and support to implement those changes, to adapt to a new operating environment and to refocus on the task of supporting their beneficiaries at a time when they will need that support more than ever.

As my earlier blogs have made clear, I am deeply concerned that the Brexit vote has revealed deep divisions in UK society – not only between young and old, rural and urban, rich and poor, but more deeply between those who have survived the recent recession relatively unscathed and those who have been left alienated, marginalised and with little hope of improvement in their lives or those of their children. There is a real chance that the dramatic economic changes ahead will also impact unevenly and that those most vulnerable will again be the ones hit hardest. Many of those who voted for Brexit in a cry for change will in all probability find that their lives become even more difficult as their hopes are betrayed by whichever new leaders finally emerge from the current unseemly grab for power. Our proud history as a globally engaged and cosmopolitan society is under threat. Who will be there for the poor and vulnerable, in the UK and abroad, come what may? Charities! Who will help the excluded to have their voices heard? Who will speak up for the disempowered in the corridors of power? Who will stand up for ethics and values of fairness, justice and equity in a divided society; who will hold Governments, businesses and institutions to account; who will continue to provide vital support when local authorities and public services suffer further budget cuts? Charities! But only if they are able to succeed in their fundraising and are free to campaign for the interests of their beneficiaries. Only if they can continue to attract talented people to careers as fundraisers, campaigners, communicators and frontline providers who will not find themselves reviled in the media. Only, in short, if our society, public, media, political, business and religious leaders and influencers speak up for charities and back them in every way they can.  We need to see a new wave of support for the work of these vital organisations, a step change in the respect and recognition they are given. Let us lend them our trust, or financial support and our voices so that they can play their part in ensuring a better, more compassionate future for those in greatest need.