Early in my career in international development, I noticed that very many of the people suffering the greatest poverty, exclusion and deprivation were living in one of three environments:

Of course, there are numerous complicating factors, not least the presence or absence of war in the affected areas, and there are many poor people who don’t fall into these neat categories, yet still this seemed to me a question worthy of further consideration.  I called it the Three Margins Theory – the idea that the poor are progressively pushed by their poverty and disadvantage to the most marginal environments, in order to seek a precarious livelihood in places no-one else wants to live, or are the ones left to cope as those areas become ever more marginal for human survival. These places are the ultimate ‘periphery’ in the terms of Andre Gunder Frank’s centre/periphery thesis. Frank believed, if I remember correctly, that developed countries (and richer parts of poor countries) prospered through the exploitation and underdevelopment of other countries, regions, or people who were the providers of cheap labour and natural resources, driving growth but in a very unequal distribution. But what of those who are excluded even from the unequal benefits of low paid work or resource extraction, not just poor but facing daily life-threatening deprivation?

I was struck, when I began to study development by a lecture from the economist Susan George (see How the Other Half Dies (1976)) in which she argued that the global system of wealth creation did not have a self-interest in improving the livelihoods of the poor, but could proceed quite well thank you if it allowed the poorest to continue in deepening desperation and vulnerability. The persistence of deep absolute poverty despite huge economic progress seems to indicate that the world has not yet found, and acted upon, the policies which would improve the lot of all through a more egalitarian and socially responsible kind of development. There are still hundreds of millions who live lives of extreme poverty despite the existence in the world of sufficient resources for everyone to live rather than to struggle daily for precarious survival. The self-interest arguments for egalitarian development can be made, and the moral argument is undeniable, yet the world continues to become, if anything, ever more unequal and continues to leave millions behind in every part of the world. The Sustainable Development Goals have adopted the principle ‘leave no-one behind’. If we are ever to achieve that ambition, let alone by 2030, we will need to focus a great deal of attention on those who are the left behind. Where are they, who are they and what can be done to improve their lot.

Thinking about this question brought me back to my earlier idea of the Three Margins.

The poor people in those three areas often get the blame for the environmental damage and extreme conditions they experience. If only people didn’t try to graze their cattle in the desert, or chop down trees in the forest or migrate in ever-increasing numbers to polluted slums, perhaps the world would be a better place? But these people are not the perpetrators but the victims of environmental degradation and economic inequality. Indeed they are often the most efficient and frugal users of resources. Slum dwellers may live by recycling the waste of those around them while small farmers and herders in marginal lands use the least water and other inputs per unit of agricultural output.

If these people could find a livelihood in places less challenging, then surely they would do so. Why then do people live such hard lives on the very edges of our global civilisation? Because they feel they have run out of other choices.

It is estimated that around 12 million hectares of productive land become barren every year due to desertification and drought alone (UNCCD, 2014). This process is exacerbated by climate change and by the exploitation of marginal land for agriculture. In the Sahel region on the southern edge of the Sahara in particular, temperatures are rising and rainfall is declining. By 2025, up to 2.4 billion people across the world may be living in areas subject to periods of intense water scarcity. This may displace as many as 700 million people.

Each of the three margins has its distinctive characteristics but what they have in common is the desperation of the struggle for existence in unforgiving environments. The desert margins are not a destination for those seeking livelihoods, but rather a place where millions are finding it increasingly difficult to maintain the pastoral way of life of their ancestors in a climate change affected world. It may be possible to help them through improved technologies and innovations such as water harvesting, food banks and solar energy, as well as tree planting, and through the provision of health and education services that fit in with their lifestyles, but many will be forced to migrate. They will move towards more fertile lands where they will come into conflict with settled agriculturalists, themselves struggling with the encroaching desert. This has been seen as one of the drivers behind the conflict in Darfur. Or they will become environmental refugees, often ending up in the expanding urban areas. In the context of the European migrant crisis we are already seeing people from the Sahel region among the migrants risking their lives crossing the Mediterranean.

It seems that the issues of desertification and deforestation hit the headlines less than in the past, perhaps because they have been absorbed into a wider narrative of climate change. Climate change is certainly making these problems worse but they were already happening as both the desperation of the poor and consumer demands of the rich put increasing pressure on marginal environments.

Forests are important to everyone on earth – the lungs of the world, converting carbon dioxide into oxygen, the source of many of the medicines that are enabling us to live longer, healthier lives. For many of the world’s 350 million indigenous peoples they are home. The forests and their traditional inhabitants are under threat from commercial interests in mining, oil, timber and ranching as well as the damming of their rivers for large scale hydroelectric projects. Indigenous forest dwellers are also joined by small farmers who cut down forest to grow crops in the poor soil and then move on, and by small scale miners who risk their lives digging for minerals. All these inhabitants of the forest margin are living in often extreme poverty and deprivation while the forest itself is disappearing under multiple pressures.

It has been estimated that the equivalent of 1000 football fields of forest has been lost every hour for the last 25 years.  The planet has lost 1.3 million square kilometres of forests since 1990 – an area larger than South Africa. 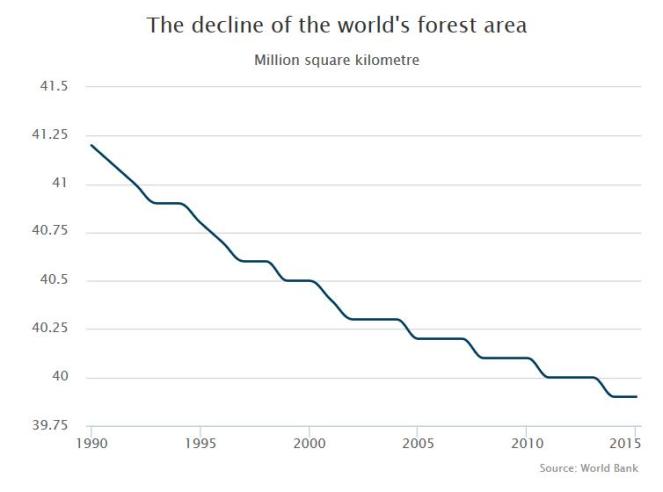 There is much that can be done to protect the forests and the people who live there, from protected areas to sustainability certification of forest products, but as long as the demand for wood, minerals and beef combines with the search of the poor for livelihoods at the margins, our forests, and therefore our climate, continue to be threatened.

In 1800, only 2% of the world’s population lived in cities – now it is 54%. 1.5 million people are added to this total every week.  By 2050 the urban population is expected to rise to 62% in Africa, to 65% in Asia, and to 90% in Latin America. And many of the new arrivals, having found access to productive land and livelihoods in the countryside increasingly scarce, are moving in to the ever-expanding slums.  The number of slum-dwellers reached 863 million in 2014 – an increase of more than 200m since 1990. These urban poor often lack services as governments fail to provide clean water, schools and health facilities to informal settlements.  Perhaps fearing a pull factor that would further increase the pressure on the city infrastructure, they deprive slum dwellers of their most basic rights, throwing them into the clutches of criminal gangs and slum landlords.  People in high density and poorly built homes, often on steep slopes or in flood plains are at greatest risk if disaster strikes, and at continual hazard from disease outbreaks. The quality of life indicators for the urban poor are often even worse than in the poverty stricken villages from which they came.

The solutions to urbanisation vary from improvement of rural livelihoods to self-help schemes for slum dwellers and improvement of their infrastructure and services. The urban poor are resourceful, they are recyclers and micro-entrepreneurs. With the right support they can fulfil their potential and contribute to the wellbeing of their cities and societies.

But the three margins together point to the twin problems of environmental degradation, especially climate change, and global and local inequity.  The solutions can’t only come through addressing each margin in isolation, but have to be based on a global approach to the global problems and challenges that condemn more and more people to increasingly precarious lives in some of the world’s most difficult places. They may be the face of these global problems at the sharp end, but they impact on all of us through the impacts of climate change, migration and conflict and instability. So even if Susan George was right in the 1970s, I think today there is a clear global self-interest in tackling these problems, as well as a moral imperative to assist those who struggle daily at the margins where global challenges become matters of life and death. ‘Leave no-one behind’ can begin with those at the three margins. If development doesn’t reach them then the Global Goals will not be met.

One thought on “The Three Margins”