The human brain seems to like to make sense of things through simple categorisation. In politics, the categories are usually on a spectrum from right to left. But what do these terms really mean and is there another way to look at it?

One way is to ask whether an ideology is authoritarian or libertarian – both types can appear on the left as well as on the right. On the left, libertarianism is about freedom of the individual against the state (anarchism), while authoritarianism relates to using the power and responsibility of the state to replace the power of the capitalist market (Stalinism). On the right, extreme libertarianism generally focuses on the free market as the embodiment of economic and social organisation, where the state is seen as a distortion of that freedom. In its ambition to minimise or abolish state power it almost meets left wing libertarianism to close the circle. Right wing authoritarianism on the other hand seeks to harness the power of the state to achieve nationalistic (or theocratic) objectives and power (Fascism).

With thanks to www.politicalcompass.org the spectrum can be represented on a chart: 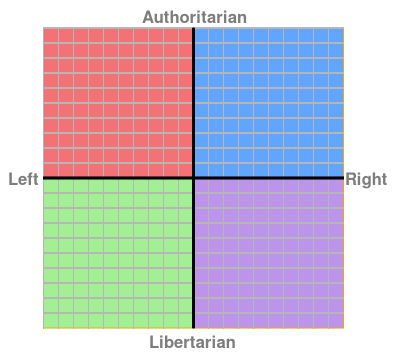 A search on the internet will uncover all kinds of attempts to place people and parties and ideas on this matrix – some quite amusing and some rather worrying! I’ll leave you to try that for yourself. You can even take a test and see where you sit on this chart.

In our western representative democracies we find political parties which represent shades of left and right within a rather narrow centre of the spectrum. Hence those with more extreme views would say “they are all the same”. But the divergences still tend to relate to the balance of power between the state and the market. Labour generally believes in state ownership, or at least strong state regulation, of key enterprises (as in the current debate about nationalisation of the railways), state provision of welfare safety nets and state action to increase economic equality through progressive taxation. The Conservatives, on the other hand, tend to believe that private enterprise can deliver services and economic growth more efficiently than the state and that state interference in that process damages overall economic wellbeing. In general, while most recognise a role for the state and for taxation they prefer to minimise both, and trust in the market to provide. Most may agree that the state should impose taxes to provide welfare for the most vulnerable but less so as a means of economic redistribution. Despite the existence of smaller parties at varying positions on the spectrum, we are still largely stuck with this binary politics of state versus market.

But, and here is my point, it is not only the market and the state that can provide economic activity and social development. For most of human history, the state as we now know it had limited reach while significant private enterprises are quite a recent phenomenon. We had feudalism of course and we had empires that rose and fell, but a great deal of economic and social activity happened in spite of those, through ‘mutual aid’ – people voluntarily working together to help each other out, as when the whole village turned out to help with the harvest. The community was the heart of society and the focus for voluntary effort to look after the less fortunate and deliver local projects and infrastructure. Today of course the village is not what it once was in most parts of the world, and it was never the utopia it may sometimes be portrayed as. I am definitely not arguing for a return to the medieval! But the principle of mutual aid has always been a powerful force and remains so today – it is one of the things that distinguishes humanity at its best – we help and support each other and look after the weak even in the most difficult circumstances. We can all see that in the world around us every day. At our worst of course we do the opposite, which is all the more reason to value and strengthen the principle of mutual aid where we can.

Even in an age of big capitalism and big state most communities could point to structures of voluntary activity that they value and support, from the parish meeting to the village hall committee to the Women’s Institute to perhaps local branches of the Red Cross or St John’s Ambulance, from local faith groups or food banks or credit unions to the Scouts and Guides, the Workers’ Education Association or the University of the Third Age, not to mention the local drama groups, sports clubs and much more.

To quote from my earlier post on charities, in the UK, there could be a voluntary organisation for every 160 people. As I said then “The total income of the UK’s Third Sector has been estimated at £71.7billion (http://bit.ly/29nnmcu). It contributes more to national income than agriculture, and employs one in every 37 people in the workforce (http://bit.ly/29vxlhE).” Most of us are involved as members, trustees, donors or occasional participants. Even state institutions at the local level, such as schools and hospitals, depend on voluntary effort through parent/teacher associations or hospital friends.

So where is the political party that focuses on and believes in the empowerment of non-state, not-for-profit social and economic organisation as the key principle? David Cameron’s Big Society initiative perhaps saw this potential, but it never had the political or financial support that could have made it work, and there was an understandable fear, accentuated in a time of austerity, that it was a thinly disguised attempt to cut state provision and funding of services. Since then, the Conservative Government has put forward a series of ill-considered ideas that work in the opposite direction – to constrain the independence of voluntary organisations (through the Lobbying Act, contractual arrangements to limit campaigning, and a more enforcement-focused – as opposed to supportive – role for the Charity Commission). Of course the ‘third sector’ is not perfect and needs proper regulation, but there is no doubt that the Big Society idea is well and truly dead and buried.

Yet there are some great examples of mutual aid in the business world, from the Co-op to John Lewis to the remaining mutual building societies, and many less well-known social enterprises where profit to shareholders is not the driving force. And there are examples of state owned (but independently operated) enterprises doing rather better than their capitalist counterparts (eg the East Coast Mainline railway franchise under Directly Operated Railways). Business and the State could both learn from the third sector and apply the principles of mutual aid in many more areas of life as well as supporting the vibrant charitable and voluntary sector that we have, from the tiniest grassroots initiative to the national and international organisations so many of us rely on and support.

Our politics should not be stultified into the eternal argument about which is best, free-market competitive capitalism, or state control and monopoly. There is a third way – and not the one Tony Blair used to talk about, which seemed to be about state services being run by businesses. A real third way would be for some or all our political parties (or if not, a new one) to value, encourage, and support mutual aid, charitable activity and innovative social enterprise as a valuable, even the preferred, form of economic and social organisation. This party would not say that capitalism is always bad or that the state is always the best provider, nor the reverse. The state has a role in regulating capitalism, ensuring justice, welfare, health and education and using economic levers to reduce inequality and disadvantage and increase opportunity. Socially responsible and well-regulated businesses have the capacity to provide all the things we want to be able to buy in a sophisticated and complex global market. But where possible, charities and social enterprises can work successfully with both state and business to ensure that service users and communities have a stake and can make a difference. They can also, as they already do, deliver services efficiently and with care, values and public trust and engagement, whether funded from taxation or from voluntary contributions, whether at the global, national or very local levels.

Perhaps we don’t need a new party, but we could certainly do with some new thinking in politics before we end up with Donald Trump, Nigel Farage and their ilk running things!

2 thoughts on “A new third way in politics?”